Start introducing training to lab puppies by beginning with some elementary retrieving exercises at eight weeks or so. Your Labrador will most likely love the game and look forward to it each day.

To teach the basic mechanics of the fetch (run out, pick up the object, return the object to the master, and release), begin by placing the puppy on a 10-foot lead.

Take a favorite toy or a ball large enough not to be swallowed, dangle it in front and above the dog’s head to gain its attention, and toss it 5 to 6 feet in front of you.

Precede your command with your dog’s name. For example, say, “Jake, fetch!” As he races for the toy, follow behind him. Make sure the lead stays loose and does not snap shut and frighten or hurt him (and perhaps permanently sour him on retrieving).

If he picks up the toy, praise him encouragingly. Should he merely eye or paw the toy, make him pick it up by shaking it in front of him, repeating “Jake, fetch!”

Once he has grasped the toy, walk backwards to your beginning spot. Coax him to follow you by motioning him toward you using your hands and fingers.

When he arrives back, get the toy from his mouth by commanding “Out!” and gently pulling it loose. Now is the time to give him a lot of praise and affection – not during the exercise, although encouragement can be helpful.

At such a young age, the emphasis in this and all types of exercise is on fun, not on performance. Improvement in response should naturally come with familiarity.

As the puppy masters the game, vary it. Keep the dog guessing. Try to remain in position and not move out toward the toy.

Later, you can attach a longer lead and extend the distance of your throw, or throw the toy sideways. Any Labrador retriever worth its name will take easily and eagerly to this game.

It is recommended that you play with the puppy often and consciously make an effort to get down to its level.

Standing upright, humans can be quite an imposing sight for a puppy. Sitting or lying on the floor, they are no longer towers but friendly companions.

Giving a puppy some eye-to-eye attention will go a long way in cementing the human-dog bond.

Because Labrador retrievers make good swimmers as adults, some misinformed people think this gives them the liberty to dunk young puppies into any available pool of water.

A Labrador is a natural swimmer, but the dog needs to learn the fundamentals before being expected to feel at ease in the water.

When a puppy’s first exposure to the water is being thrown or forced in, the shock may make it dislike and fear the water throughout life. Many potential field dogs have been ruined by improper or overzealous training.

The first introduction to the water can begin while a puppy is quite young (three months is a good age).

A puppy should be able to master the mechanics very quickly, especially if “shown the ropes” by some older dogs.

The owner should always be nearby, should trouble arise. It often helps the dog feel at ease if the owner wades into the water with it on the first dip.

Ponds or lakes, with their easy entries, are best for training water dogs. The slick tiles and steep sides of a pool are often unmanageable for the dog, and many drownings have occurred when an exhausted dog was unable to climb out of the water.

Similarly, a young puppy is not strong enough to manage a rough ocean surf, but should be encouraged to play along the shoreline in a sheltered area of shallow water.

How far would you go for your best friend? They sit beside you with their head in your lap. They lick you on the face. They wait for you till you come home. They fetch the ball for you. They love you, no matter what. Ok, so we admit it: we are ... END_OF_DOCUMENT_TOKEN_TO_BE_REPLACED 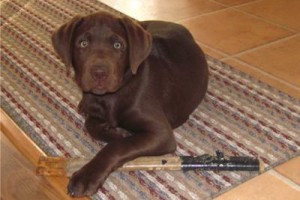 Labrador Retriever pictures of Scoop by Luc Daigle (Quebec City, Canada) Hi all Labs lovers. My name is Scoop and I am an 11 weeks old, green eyed, male chocolate Labrador… I am quite energized, but my master walks me for at least 3 miles per day and I love it. So far he’s also […]