Gus was born October 25,2003 and was a beautiful fox red labrador, hyper and loving friend.

My husband bought him for me as a Christmas present and placed my engagement ring on a bow around Gus’s neck.

He was my first baby, I carried him around (until he got to big) and was by my side throughout my first pregnancy in 2005-2006.

I was on bedrest most of the time and he laid by my side the whole time. Two years later I had my second child and Gus welcome the new baby into the family.

As my boys grew Gus became a pillow, a blanket, a wrestling mat or an anatomy project for the boys. No matter what they did he loved the attention.

He was a 80 pound lap dog, a tug of war specialist, a protector and one of the best friend and listener you could ask for.

Throughout the years Gus has eaten shoes, toys etc- you name it and he has chewed or eaten it up:)

It was nothing for the boys to have a stuff animal without eyes and everyone knew when they came over to hid their shoes or any other item they wanted to take home with them.

This past Monday Gus had a tummy ache and wouldn’t eat and he threw up water for part of the day.

We thought nothing of it as this was not uncommon for him- he ate toys on a daily basis so every now and then would have a tummy ache.

I woke up early Tuesday to find Gus laying with my oldest son, nothing could separate a boy and his dog:)

As i got ready for work something didn’t feel right so my husband planned to take Gus to the vet after I left for work and took the boys to daycare.

I left the house at 7:32 am after i kissed Gus goodbye for the day and told him no parties (it was a joke between old friends)and by 7:39am my husband called and told me to come home.

We believe Gus’s stomach flipped and he held on as long as he could.

How far would you go for your best friend? They sit beside you with their head in your lap. They lick you on the face. They wait for you till you come home. They fetch the ball for you. They love you, no matter what. Ok, so we admit it: we are ... END_OF_DOCUMENT_TOKEN_TO_BE_REPLACED 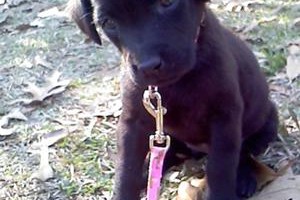 Acie Claire my baby chocolate lab by Kerstan (Vidor Texas) Acie Claire is 6 weeks old i just got her for Christmas this year. She is a doll i love her! She is a spunky playful lil girl. She is a registered Chocolate lab, and is named after her mom “Acie”. But she goes by […]