We had to put our sweetheart down a week ago on October 14, 2010. As heartbreaking as it was, I feel Tessa’s story is inspirational for everyone who loves dogs.

We adopted Tessa,a black lab mix, from our local Humane Society in 1999. At the time there was a segment on our local tv station each week featuring a pet available for adoption.

We saw Tessa (or Sprite as she was called) and thought she would be a companion for our year-old yellow lab, Darla, who had to be alone all day while my husband and I worked.

However, when we went to see her, she immediately hopped up on me, wrapped her front legs around me, and “hugged” me. My husband looked at our Humane Society director and said drily, “I think we’re taking her.”

“Sprite” had been brought in by a police officer who had found her and said she was “too nice” a dog not to be saved. I wish there was some way to let him know how right he was.

She had heartworms, but had been treated and recovered. She was very thin when we adopted her but had the most beautiful shiny fur and brown eyes which would just take you in, as she did us!

As time went on, this dog touched us in so many ways. I have had many dogs in my life and loved them all, but she had the sweetest, most loving spirit of any I have ever encountered.

She was a “snuggler” and with petting would close her eyes as if she was in heaven! The irony is that we are sure she had been abused.

I have managed to sneak some great pictures over the years, but she was terrified of a camera; we think maybe from being shot at when she was a stray.

She had little scars that could have been from bb or pellet guns. Her teeth were broken badly. Our vet thought she may have tried to chew through a chain.

She had many fears which we never understood…tearing sounds such as aluminum foil, grinding such as a food processor , clanking noises as pots and pans or unloading the dishwasher, the chirping sound of a video game, etc., all probably due to traumatic experiences in her past.

Tessa began having seizures a couple of years after we adopted her. They were grand mal, and later became clusters.

We were devastated and fully believed this disorder was what would eventually take her from us, but our wonderful vet worked with us on meds until we got them under control.

We almost lost her a couple of years ago due to severe infection of 4 of those bad teeth which spread throughout her body. She developed congestive heart failure.

Her hip dysplasia and arthritis became so painful that any animal or human with less courage would have given up.

Not our Tessa. She survived all of these with such tenacity that all of our family and friends who knew her loved her for her fierce determination to live, as well as her loving nature.

Two months ago, she developed a soft tissue tumor ( probably malignant) in her front left leg and could not walk.

At her age (we think 14) and the frailty of her back legs, we knew we could not amputate, so our vet created a brace for her and we took her home to say goodbye.

Our son and his wife came in to see her as did other family members, and everyone was so supportive.

We thought it was time…but this courageous girl recovered!! The mass did not go away, but she began eating again, could walk, and was happy…for a time. She was even able to “toddle” and fetch a tennis ball.

Two weeks ago, she stumbled while on a walk and the leg swelled up huge again. This time we waited it out for a week, to no avail. She couldn’t walk even with the brace and my husband or I holding her by her harness. If we turned loose, she would crumple.

She stopped eating and drinking water and became barely responsive. I would squirt water in her mouth with a syringe and she would not swallow.

I knew it was time when I came in from my part-time job and found that she had lost control of her bladder, something this gracious little lady would never do if she could prevent it in any way.

My husband and I had said to each other in the last years when her health continued to decline that she would tell us when it was time… and she did.

When this brave, beautiful girl quit fighting, we knew she was so tired. Our vets reassured us that we were doing the right thing, but it was still so hard.

She is at peace now, and we know she is doing all her favorite things over Rainbow Bridge…chasing endless tennis balls, doing back scratches, swimming, smiling with her new teeth, and snuggling with her Creator.

We miss her sorely, as does her precious “sister,” but our lives are richer for all she gave us.

We named her for an angel (Tess on the tv show, “Touched by an Angel”), and that is truly what she was to our family.

In Loving Memory of my Angels “LUANA+SHERRY“,

Losing my Yellow Lab Daughter Lucy-Hard to Deal With

How far would you go for your best friend? They sit beside you with their head in your lap. They lick you on the face. They wait for you till you come home. They fetch the ball for you. They love you, no matter what. Ok, so we admit it: we are ... END_OF_DOCUMENT_TOKEN_TO_BE_REPLACED 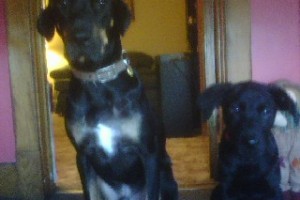 My Boys by Mike (Buffalo, N.Y.) Hogan (left) & Hunter (right) This is Hunter. He’s now close to 6 months old.Purebred lab (on the right). I got him at 4 weeks old! Yes, I know, way too young for the owners to let him go. He’s a great, fun-loving,energetic puppy. Lots of play and spunk […]