Hello Friends,
This is not only story rather it is my personal experience which I want to share with my all pet lover friends. Becoz,It is also understood by them only.
after my mother`s departure, my whole family was going via a big emotional crisis.Though,at that time,We have 1black (f)labra dog named “Jurry“.Though,since my childhood,I was so crazy about dogs/pups & we never lived without dogs.But,since then I had never watched my mom to sleep/keep any of dog on her bed. So,I must say that Jurry is the dog with whom my mom used to keep/sleep on her bed/pillow.

During those days,I was working in some some other state(in Punjab).So,jurry was not too familiar for me.On the other point of view, I can say that Jurry was not so close to me.Rather,she is very close with my other family members.So,sometimes,I used to jealous also.Though,Jurry is so social.My mom never left jurry alone at home. Jurry also loved my mom so much.Even, at night, She used to eat from her hands only.Though,my mom loved Jurry too much but she was having fear also due to her heavy weight.

So,there were many incidents, which showed that she loved Jurry too much.One incident ,which I can never ever forget of “JURRY“. That after departure of my mom,“JURRY“ had not taken her meals for 3days.I had never seen this type of incident in my life before this.At that time, “JURRY“was locked inside the room.Then,my Aunty said to my father that let the allow “JURRY“ to go & watch my mother`s body.
so,we followed what ever my Aunty told us.

This is the first incident in my life,after which showed me her loyalty & unconditional love. “JURRY“ is the first labrador dog of my life.On 25th & 26th March 2007, jurry gave birth 8pups.Out of which 2 we kept.but,the most important thing is that we were very closely attached with all of them.But,it was too difficult to take care all of them.So,my father decided to distribute each of them in good families. so,they can take care all of them nicely.

but,in few months/days,they were attached with us also.Both of the pups we kept named Luana(f) white labra born on 25th March 2007 & Sherry (M) black labra born on 26th March 2007.One important thing is at that time,we were going via a big emotional crisis due to uncertain departure of my mother.
After watching their naughty activities,we enjoyed a lot. They diverted our mind. They made us laugh. I must say that they made our environment light & sound. Even,my father was totally involved himself on both of them. They had done lots of changes in our life.

OUR LABRADOR DOG , OUR HEART PASSED AWAY

How far would you go for your best friend? They sit beside you with their head in your lap. They lick you on the face. They wait for you till you come home. They fetch the ball for you. They love you, no matter what. Ok, so we admit it: we are ... END_OF_DOCUMENT_TOKEN_TO_BE_REPLACED 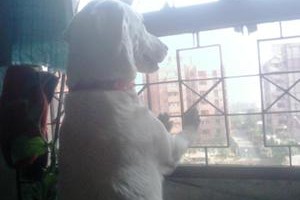 Shine – Light of our lives by R.Umashree and G. Swathy (New Delhi) What a world – why are human beings always in a hurry! I used to love dogs when I was young. However due to lack of space, money and stability I could not get one. My daughter loves dog and had been […]